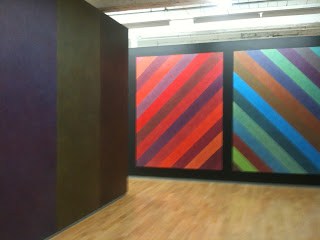 Mass MoCA in North Adams is one of the largest centers for contemporary visual and performing arts in the US. It is located in a converted factory building, which offers huge display spaces. We went primarily to see the "Oh, Canada" and "Invisible Cities" shows. Fortunately, a tour of all the galleries was beginning as we arrived. It was nice to get an overview of the space and introductions to pieces in each gallery. The most interesting installation was the Sol Lewitt retrospective. Please visit this site to understand the magnitude and importance of this show. 65 artists and students spent 6 months installing the work which will be on display for 25 years. Lewitt had gifted his work to Yale University late in his life. Yale, realizing their space limitations, sought out a loan agreement with Mass MoCA, and LeWitt agreed. He visited and collaborated on the placement and configuration of the spaces prior to his death. My House Critic and I debated the universal and eternal question, "is that art?"  The debate was not over the finished work, but over the fact that one purchases the LeWitt diagram and instructions, not the mural. It does blur that line between design and fine art.  But isn't all art blurry these days. And it is far from unusual for a noted artist to have studio assistants apply paint to surface.  What we are unclear on is the extent of detail in LeWitt's design.  Did he dictate the color mixture, the exact size of each line?

Of the two other shows, I liked The Mountain by Graeme Patterson in the Oh, Canada show.  My best description is "art within art within art".  If you've ever read The Mouse and His Child by Russell Hoban, you will recall a passage where the Mouse and his child are stuck in the bottom of a river.  They can't move; all Mouse can do for days is stare at an empty dog food can in front of him.  The label on the can pictures a dog holding the same can with the same label.  This image repeats itself ad infinitum.  All the Mouse can do is try to find the last image of the dog holding the dog food can. Everything in The Mountain relates to everything else. Patterson describes it as the first of four installations that focus on his personal experience with male bonding.  It is very witty.
Coming in as close second favorite was the entire Invisible Cities show, particularly Melting Pot by Miha Strukelj.  The concept is inspired by Italo Calvino's novel of the same name in which imaginary conversations take place between Marco Polo and Kubla Khan.  Polo describes his voyages and the cities to Khan. 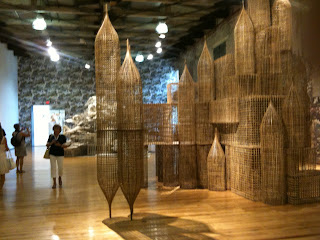 One note.  I noticed that a lot of the sculpture was formed with found materials, mostly manufactured.  For example, Patterson used white sheets, afghans to represent snow atop his mountain. I was so happy to have finally seen some contemporary art that can be visually exciting, provoking, evoking and accessible without extensive reading and probing to understand the artists' intents.

Posted by Christy Gunnels at 5:18 PM No comments: