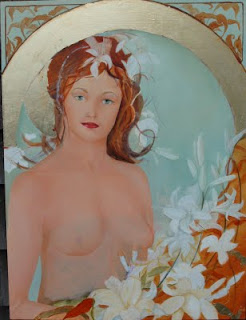 in Greek religion and mythology, queen of the Olympian gods, daughter of Kronos and Rhea. She was the wife and sister of Zeus and the mother of Ares and Hephaestus. A jealous wife, she fought constantly with Zeus and plagued his mistresses and children. She was the protectress of women, presiding over marriage and childbirth, and frequently punished offending husbands. A powerful divinity, Hera was worshiped in all parts of Greece, especially at Argos and Salmos, where she had splendid temples. She is usually represented as a majestic figure, fully draped, crowned with a wreath or diadem, and carrying a scepter. Frequently she is associated with the pomegranate, symbol of marital love and fruitfulness. The peacock was sacred to her. The Romans identified Hera with Juno.
I spent most of the day working skin tones. I'm going to drape the figure and add pomegranate and peacock eyes on the arch. I may or may not include a white veil.
Posted by Christy Gunnels at 4:56 PM No comments: