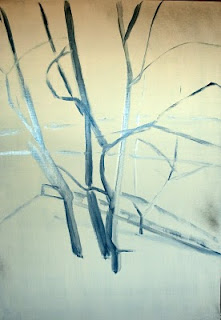 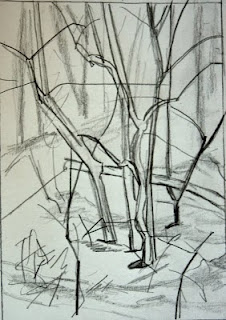 Now that we are in the deep of winter and the snow has begun to accumulate, I have revisited the idea of painting the Conservancy Bush in 4 seasons. I had envisioned all of the bare branches dressed in snow and ice. This has not happened (yet). What surprised me was the bright yellow of the branches. But most of the bush is lost in the tangle of background growth. As a result, I have decided to bring the view up much closer and have the base of the bush fill the frame. This might actually make for a more interesting series. Rather than a duplicate of the point of view, a change in composition as well as a change in the season will be the approach. On the left is a sketch of the proposed work. On the right is the painting, oil on board, 40" x 30", with a rough layout of the bush.
Posted by Christy Gunnels at 3:02 PM No comments: